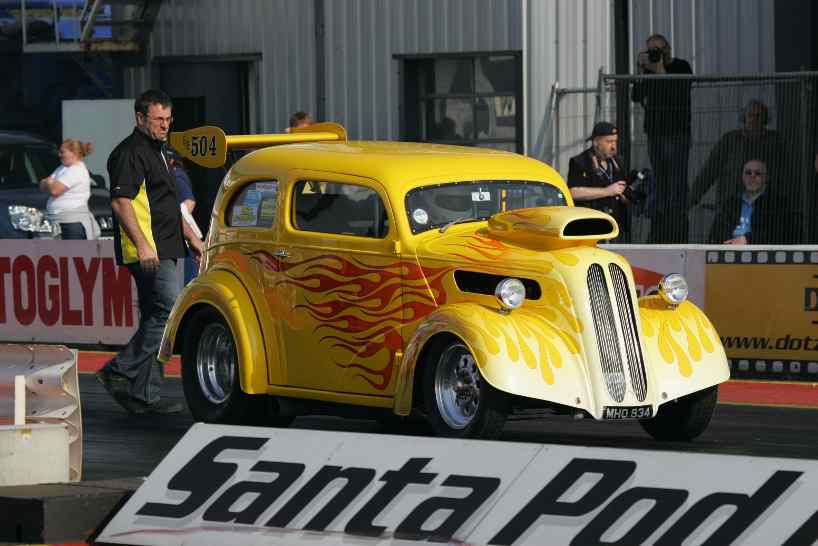 Here we go again same old stuff car going towards the wall, out of shape how much more can the car take?. I need to put more power in to keep up with the others but the car just don’t want to go straight. So we spoke to John Webster of WEBSTER RACE ENGINEERING who happens to be one of our competitors.

John came over and had a little look-see and came up with a four link change we have never used before.

With help from Splinter and Phil the wheel we set about the change, first run the car come round in the burn out and on the run felt a bit loose like driving on marbles.

A few adjustments were made and the car started to respond.

We made it to the finals and I was up against John Webster. He reminded me the last time we raced back in 2005 my car caught fire at half track, I remember keeping my foot in to take the win.

This time John took the win with a PB 8.1 we came back down the return road and two fire balls came out from John’s car (watch out lads if John offers to help you in the pits make sure he don’t fit a touch paper, I believe this was his cunning plan to burn me down but it didn’t work). We stopped outside scrutineering and I grabbed my fire extinguisher in an attempt to put out John’s car. John was so laid back he was nearly vertical. Don’t anything faze him?

All jokes aside, thanks to John, Phil and Splinter for their help.